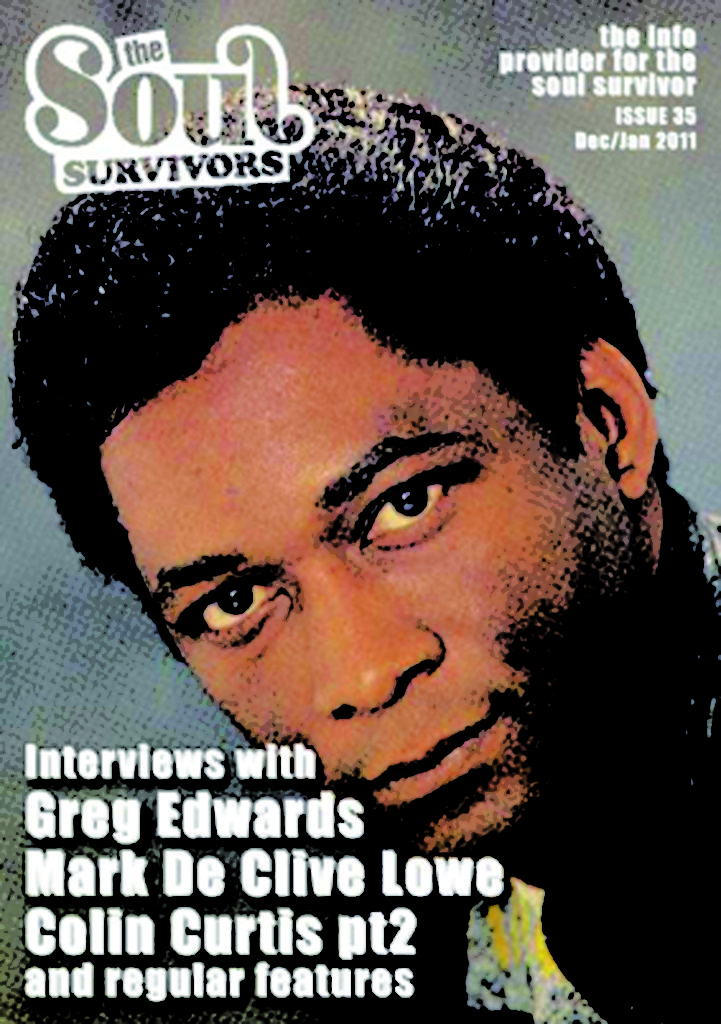 Greetings, hope all are good in their iSOULated hoods. Today’s Friday Fitztory shares excerpt of a two part interview conducted with the self proclaimed ‘refugee from across the sea’ Mr Soul Spectrum’ Greg Edwards. This was published in issue 35 7-8 years ago on the cusp of the festive period of 2011 / 2012. Like many I listened to Greg religiously Saturday nights, between 6 and 9pm in the late 70s and early 80s. His history is simply prolific and in particular for being probably like Carlsberg, the most celebrated black DJ in the UK, with a unique status to have a far reaching forum both on radio and in the clubs, like the hugely celebrated white DJs championed during that golden jazz funk and soul era. I’ve been fortunate to DJ with Greg over the years and acknowledge him with a 40 years award for being a ‘Master Of The Airwaves’ in our 2017 Under The Bridge event. Greg did share with me that after witnessing the documentation of other DJs prior in The Soul Survivors Magazine, he was anticipating his ‘bathroom call’ to be spoken to. I replied “Greg you were always on the cards but it’s all about timing.”.. To order you hard copy go to
https://www.thesoulsurvivorsmagazine.co.uk/product/issue-35-december-january-2012/
Until then Read and enjoy Fitzroy
Fitzroy: “It’s interesting you use that phrase painting pictures as my next question points that out. Your Soul Spectrum show on Capitol was where I heard you Saturdays 6-9pm. I so remember dancing and practicing my dance moves in front of the mirror like Saturday Night Fever’s Tony Manero. You had the lingo and street patter that flowed like water from a tap. It was that smooth like we’d hear in Blaxplotation films but now you helped painted those visual in our imaginations. What you said earlier about the BBC exec who pulled you into the office about your music choice, begs me to ask you about working in a white corporate environment. What was your personal black experience like in witnessing what it took to make the music more accessible, as you clearly came across quite a few restrictions?”
Greg Edwards: “There were restrictions and prejudices and I had to put up with a lot of people making phone calls and writing letters..a lot of which they wouldn’t allow me to see after a while. I’m talking things like take all that jungle music off and put on proper white music etc. I also had the inverse prejudice in terms of presentation. It’s alright if Robbie Vincent took a high moral ground and played a black record speaking very heavily and politically on black politics, but If I played it, I’d be accused for using the radio for black propaganda. I had to find different ways of doing things and refused to do clubs that wouldn’t let black people in, as I did black clubs that refused white people. I had to take my own moral stand and not use the radio for preaching that sort of thing as I’d be taken off radio.”
Fitzroy: “Now I’ve spoke to various DJ’s of different ethnic backgrounds Colin Curtis, Morgan Khan, Chris Hill, Robbie Vincent, Bob Jones, George Power and Dez Parkes and the industry racism perspective is always denounced. As young blacks coming from the Caribbean listening to music of our heritage, we were grateful to hear the music on radio or in a club. Because of the shortage of black DJs and presenters playing the music, we weren’t really bothered who played it, they could have come from out of Mongolia. But when you came along it was like Muhammad Ali winning the heavyweight championship in 1964, it was a moment where we young blacks saw someone who was a reflection of us, up there getting recognised in what they’d do. So we’d notice that amongst the Funk Mafia you were the only black DJ…”.
Greg Edwards: (Greg interjects and laughs) ..”People always mention that but it depends on your perception and I didn’t make any noise about it… where Bob Jones, Robbie Vincent and Chris Hill worked, I wasn’t invited to play at 80% of those places. I did the Royalty in Southgate and they refused to accept that the Best Disco In Town existed at the Lyceum, even though the show was on the radio and had 2000 kids having fun in it every week. There was only a handful of clubs where we worked together. A lot of club owners took it for granted that I was white as the other DJs playing the music were white. On at least two occasions where I was booked and turned up, they saw I was black and I was refused entry because the bouncers didn’t check with the management.”
Fitzroy: “But how did you deal with that?”
Greg Edwards: “I’ve had to deal with it all my life so it didn’t upset me I just got in my car and go home and did the same if they would let black kids in I would not return to the club.”
To order you hard copy go to
https://www.thesoulsurvivorsmagazine.co.uk/product/issue-35-december-january-2012/