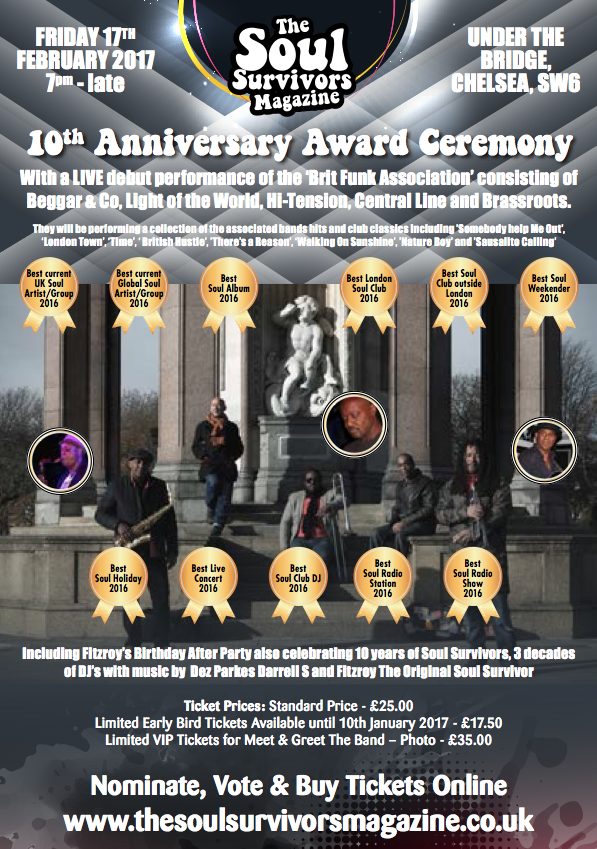 Greetings, The Soul Survivors Magazine feels duty bound to clarify the voting and nominating process of the awards due to some queries received since the announcement of the nominees a week ago. The one thing we seek to maintain is our integrity in whatever the magazine is associated with. It is our challenging mission to ‘Spread Love’ like Al Hudson across the Sounds Of Universal Love (SOUL) and its sibling genres forum worldwide. Next month on the 17th February we host our 4th Soul Survivor Awards at Under The Bridge in Chelsea SW6, the first after a sabbatical since September 2013. Each time we have sought to improve the process. The single most important element however that has and always will remain integral, is for us to provide an impartial, unbiased and fair process to enable the people to nominate and vote under their favourite categories. This is done in a Malcolm X ‘By Any Means Necessary’ process in notifying as many people as we can by email, social media, press, radio and in recent times videos and You Tube footage. It solicits a lot of interaction and interest from those with the enthusiasm to get involved on many levels. The results may not always be the desired or expected ones but like recent elections and major life changing voting processes if you don’t get involved your abstinence or frustration instantly becomes annulled.

So it’s disheartening to say the least, with next months pending Awards Ceremony, that there are negative energies trying to discredit something that is purely seeking to spread ‘Universal Love’ like Woods Empire. Cries of “It’s a fix! It’s a southern thing, funny hand shakes and it being some kind of nepotism farce, are as ridiculous as saying there is no racial discrimination in this so called ‘soul family’. We understand the inevitable disappointment and disgruntlement naturally if one feels they are not represented in the nominations or voting results, because it feels personal particularly  when you have passion and pride in whatever you feel your contribution is to the scene. However we can assure you that despite the challenging spamming and skulduggery that attaches itself to any democratic process like this, we only reflect the people’s vote and do not and will not manipulate the outcome. So it is quite alarming that since the shortlist was announced a week ago, that practically every day thus far we’ve had either text’s, Facebook Messenger contact as well as being approached physically in public with individuals questioning the integrity of the awards process and pending results (we must give a special mention to those who think they are operating in the shadows who choose social media to make unsubstantiated statements based on their own personal disgruntlement and opinions that are not based on any facts, who also have done so without actually seeking to obtain any clarification of the process). It seems even a democratic process isn’t going to please everyone (you are damned if you do or damned you don’t) but we’ve been cussed, insulted and bribed to the point where we’ve actually considered wearing bullet proof vests or seeking to employ Marvel superhero Luge Cage with some of the overt and unwarranted ‘Fluke Rage’ we‘ve experienced.

Some acknowledged the explanation broken down to them humbly and some still found excuses to contest what is obvious, however we are not going to name and shame because those individuals know who they are. What we will ask is why are they now questioning the validity of a process that actually gained them either an award or more notoriety in previous Soul Survivors awards? When in reality the reason why they are not recognised in these particular awards is simply because not enough of their supporters turned up to nominate, but now their exclusion is deemed to mean the nominations are invalid, fixed and manipulated? Reminds me of the results of a Jeremy Kyle lie detector test, that’s right when they are proved to being wronged, but suddenly is wrong when it reveals that they’ve in fact been like Louisa Marks ‘Caught In A Lie’. Secondly we would ask, if we chose not to do this on a democratic basis and decided to manipulate the outcome with ism’s, skizzims and nepotism, would that be considered a more acceptable outcome? Surely we would be committing the most heinous crime and would be publicly hung drawn and quartered right? So please do come forward and suggest how else does this process can work any more fairly… or is it simply because the back scratching and funny handshakes standards that some practice as the norm, are so endemic that this is considered a more accurate reflection of success?  Are these, not very high standards, the basis on which The Soul Survivors Magazine and awards should be judged by?

’Seriously folks’ like Hughie Green, instead of looking to blame the system for the failure of no recognition, look, within your own camps who didn’t turn up for the nominations or the votes with enough support. If you’re not part of the solution, you’re part of the problem. The awards is also not just about your suited category. There are at least 10 other categories who all have been derived from the same process. It’s full of surprises which make for healthy competition. It has induced elements of galvanised vigour where you see for example in the best concert category the diversity of Stevie Wonder, Mary J Blige & Maxwell and Moments Of Love UK Soul Sessions lined up to fight for the top spot. None of these events were advertised in the magazine so what do we have to gain in organising a fix? Like Barry White  ’Come On’.. As an independent entity that is seeking to embrace, recognise and support everyone with a Don Blackman ‘Universal Love’ theme in the form of celebration and contribution to our beloved music scene, it’s a shame that there are individuals that want to compete rather than contribute in the success of others safe in the knowledge that this a representation of the global love for the music we all share and love to be a part of.

In addition to the peoples vote the magazine has decide to give some lifetime achievements to some individuals who have given over 40 years of service to the music scene in some shape or form. Some are instantly recognisable and some remain un sung hero’s and heroins. They include Greg Edwards and Robbie Vincent for their relentless radio presence spanning back to the mid 1970’s. Chris Hill and George Power who never did the Funkadelic ‘One Nation Under A Groove’ gig together but were upfront for their respective South East and London soul fraternities. Mixing it up like a Muller Light dessert, in his 50th year we salute the north’s and Stoke’s fave soul son Colin Curtis as well as Dr Bob Jones who has spent a half century at the crease also. Jean Carn the first lady of PIR Records and Liverpool’s black ‘Fab Four’ The Real Thing deservedly get the long overdue acknowledgement as does Dez Parkes an all round first generation musicologist extraordinaire.

Some of these I know better than others personally but equally they have made an outstanding and sometimes underestimated contribution to what we have today. There will probably like Carlsberg be some desertion amongst the ranks with some positioning themselves or others as being more deserved of such an accolade but their dispute or despondency is nothing but a human entitlement. Taking a positive thing out of all of this there is nothing like a Prince ‘Controversy’ to keep the momentum going. I sincerely hope you all do a James Brown ‘Get Up Get Into It And Get Involved’ either in the voting or to attend the awards which hosts the debut concert of The Brit Fink Association. It’s going to be a historical night the 17th February 2017 for all of us like mixed fellow soul survivors. Please click here for tickets, £17.50 early bird ones offer ends at midnight today. 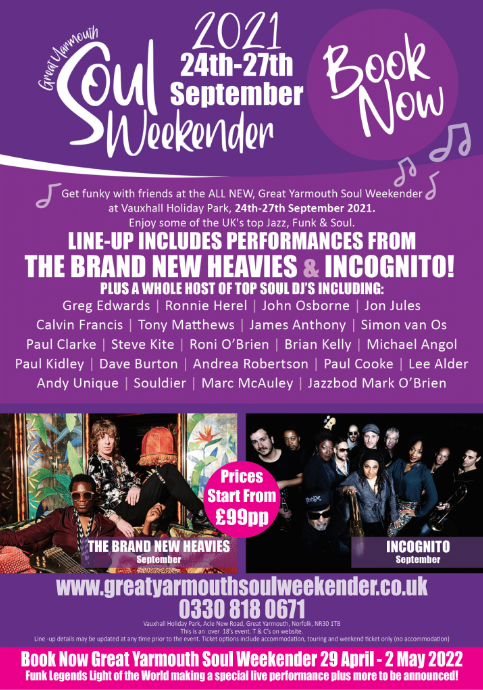 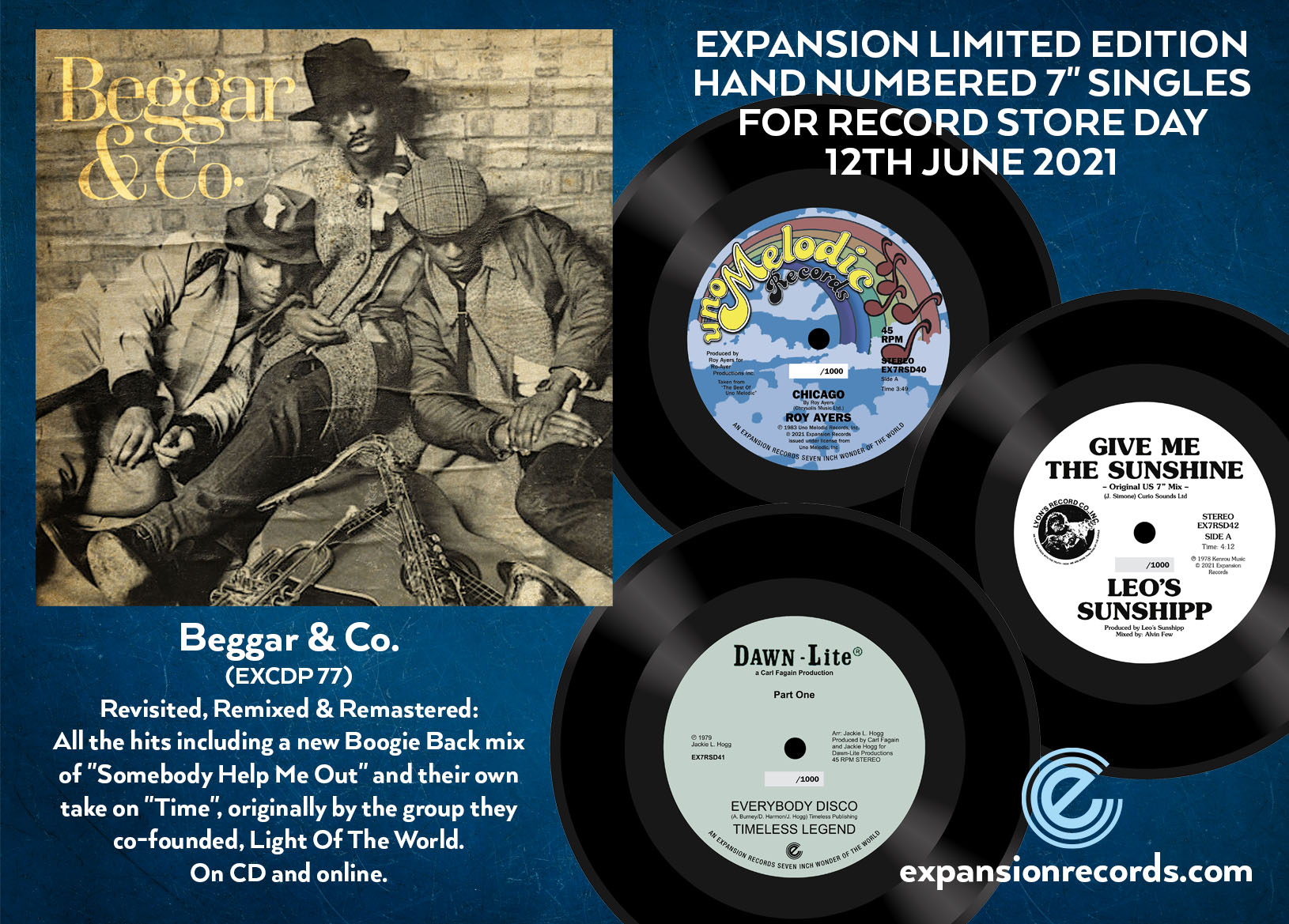