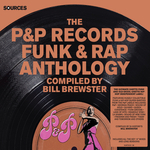 I have mixed views about this triple pack P&P release as there is at times no rhyme nor reason in the running order of this very versatile catalogue. That aside, although not all of it is to my personal liking, it does show the diversity that the respected P&P label hosted. With its comprehensive sleeve notes and artwork, written and complied by Bill Brewster it’s a weird at times and wonderful at others collection of the P&P subsidiaries Heavenly Star, Golden Flamingo, Sound Of New York and Queen Constance label siblings.

CD 1 opens with the classic Queen Yahna sweet disco boogie “Ain’t It Time” followed by two crazy rock and soul number’s “Black Ice” and “I’ve Been Working”. Between Eddie Owen and Florence Miller their songs have that Northern Soul fans flavour, whereas and Ella Hamilton throwbacks to that doo wop James Brown “Prisoner Of Love” power ballad era on “Here’s To You” . Much of the P&P catalogue that I know of has something uncouth or slightly sonically left of the right, in their recordings and productions but in an innocent but unconsciously unfashionable manner. Scott Davis Movements “Apple Jack” disco hustle groove typifies this. The most rough rugged and raw dirt gritted funk bomb has to be The Sentimental Souls “It’s Party Time With Getting In The Groove Pt 2 (Original 7″ Mix)”. Smokie Brooks social messaged “Long Time Ago” should not be overlooked  by the way.

There is pure brilliance showcased on The Foster Jackson Group familiar “Feel The Spirit” and finishing CD 1, I’m enamoured by Margie Lomax’s mid tempo boogie fest “God’s Greatest Gift To Man Is Woman” . CD 2 and 3 concentrate predominantly on the merge between boogie hip-hop and rap. Some of the dated rapping sounds corny now because the lyrics at times are rehashed from The Sugar Hill Gang’s initial impact on party rap. Sherod “Schoolin”, Margo’s Kool Out Crew “Death Rap” and Sweet G “Boogie Feeling Rap” for me have the better consistent vocal flows.

There are different rappers Including Spooning G and Scoopy using Cloud Ones “Patti Duke” rhythm . Using The Rhythm Heritage’s “Theme from S.W.A.T” bass groove with occasional bongo breaks, Mistafide’s 11 minutes “Equidity Funk” ends CD 2 nicely. CD 3 is probably like Carlsberg the best consistent CD with the very funky uptempo “Roller Rink Funk” and a P funk influenced “Big Foot Boogie”. “This Is The Way To Break” is brilliant remnant of  Run DMC’s “Sucker MC” and Little Starski “Gangster Rock” has a tasty instrumental groove with some ad libs. To close Little Scotty “Shout At The Disco” is a funky driven 4 floor groove which has a great break beat halfway through.