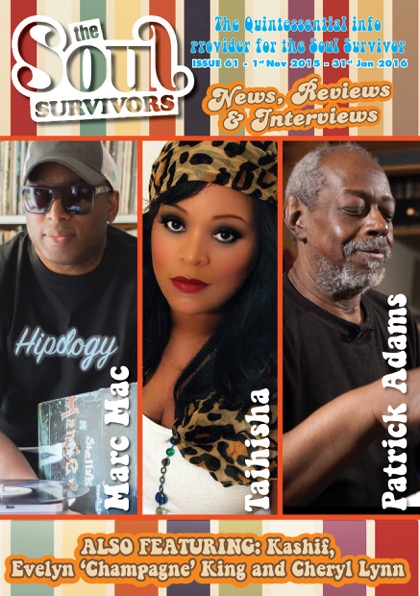 Greetings this Flashback Friday. I sincerely hope everyone is safe and healthy in their safe iSOULAtion zones. Todays Friday Fitztory comes courtesy on an interview I did in 2016 for issue 61 with Marc Mac. He was featured on a first for us split screen front cover with singer songwriter Tahisha and the ‘disco messiah’ Patrick Adams. Marc is a west Londoner like me who under various aliases had released a few tiles I had in my collection unbeknown to me. Musically versatile and respected world wide. Here is a segment from our interview read and enjoy Fitzroy

Me: Your second album Parallel Universe is voted album of the year by NME in 1995 and a year later you remix Nu Yorican Soul’s cover of ‘Black Gold Of The Sun’. Louie Vega says it’s on of the best remixes’ he’s ever heard. I’ve got the Rotary Connection original and loved what you did with it as a cross pollinated balanced production of digital and analogue menagerie. What you achieved there is what Charles Stepney and The Mizell Brothers display on their amazing productions. This is why I cited you as one of 6 influential musician producer’s for Sky TV’s Culture Vulture Black History month special last year.

Marc: I’ve never thought of it like that but now I can understand exactly what you’re saying. At the time with Rotary Connection there was this thing of them interlocking soul with psychedelic music, and behind the scenes there was a pending thought of how to merge the two together. The Mizell Brothers were also trying to incorporate the synthesisers with jazz and I’ve read some artists like Johnny Hammond didn’t like what they were trying to achieve. So yes I can relate to having a battle bringing the electronic sound and sampling through intertwining with what people perceived as soul and jazz traditionally and presenting it in a new way.

Me : I loved the production of drum and bass because it reminded me of the Blue Note Prestige and Strata East quality, but on an independent label from the UK. How did you get the gig to remix ‘Black Gold Of The Sun’?

Marc : That was through Gilles being clever with us both being signed to Talking Loud. We did the ‘Le Fleur’ cover because Gilles did an article in a newspaper saying that no on could do that track, apart from maybe 4hero. Using that B Boy mentality we rose to the challenge. It’s an honour for Louie to credit us so highly for doing that mix. When Gus took the final mix of ‘Black Gold Of The Sun’ down to Talking Loud, both Paul Martin and Gilles Peterson had tears in their eyes upon hearing it. The icing on the cake was hearing from Charles Stepney’s daughter who had nothing but high praise on what we did and we are still in touch with them now.

To read the full interview you can purchase via this link